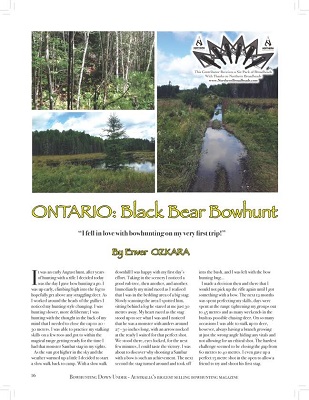 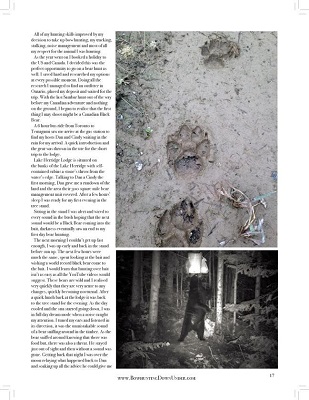 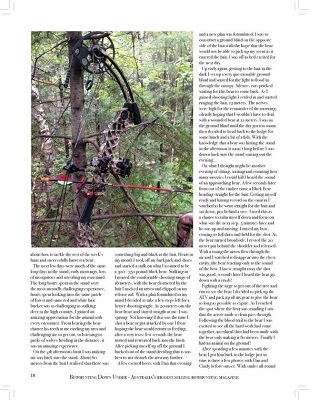 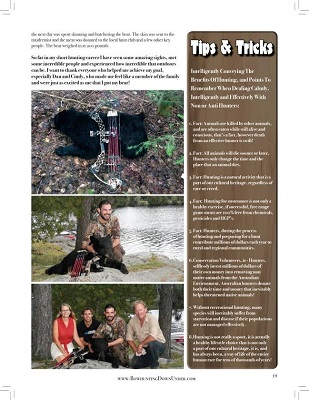 "I fell in love with bowhunting on my very first trip!"

It was an early August hunt, after years of hunting with a rifle I decided today was the day I gave bow hunting a go. I was up early, climbing high into the fog to hopefully get above any straggling deer. As I worked around the heads of the gullies I noticed my hunting style changing. I was hunting slower, more deliberate; I was hunting with the thought in the back of my mind that I needed to close the cap to 20 - 30 meters. I was able to practice my stalking skills on a few roos and got to within the magical range getting ready for the time I had that monster Sambar stag in my sights.

As the sun got higher in the sky and the weather warmed up a little I decided to start a slow walk back to camp. With a slow walk downhill I was happy with my first day's effort. Taking in the scenery I noticed a good rub tree, than another, and another. Immediately my mind raced as I realised that I was in the bedding area of a big stag. Slowly scanning the area I spotted him, sitting behind a log he stared at me just 30 metres away. My heart raced as the stag stood up to see what I was and I noticed that he was a monster with antlers around 27 - 30 inches long, with an arrow nocked at the ready I waited for that perfect shot. We stood there, eyes locked, for the next few minutes. I could taste the victory. I was about to discover why shooting a Sambar with a bow is such an achievement. The next second the stag turned around and took off into the bush, and I was left with the bow hunting bug...

I made a decision then and there that I would not pick up the rifle again until I got something with a bow. The next 12 months was spent perfecting my skills, days were spent at the range tightening my groups out to 45 metres and as many weekends in the bush as possible chasing deer. On so many occasions I was able to stalk up to deer, however, always having a branch growing at just the wrong angle hiding any vitals and not allowing for an ethical shot. The hardest challenge seemed to be closing the gap from 60 metres to 40 metres. I even gave up a perfect 15 metre shot in the open to allow a friend to try and shoot his first stag.

All of my hunting skills improved by my decision to take up bow hunting, my tracking, stalking, noise management and most of all my respect for the animal I was hunting.

As the year went on I booked a holiday to the US and Canada. I decided this was the perfect opportunity to go on a bear hunt as well. I saved hard and researched my options at every possible moment. Doing all the research I managed to find an outfitter in Ontario, placed my deposit and waited for the trip. With the last Sambar hunt out of the way before my Canadian adventure and nothing on the ground, I began to realise that the first thing I may shoot might be a Canadian Black Bear.

A 6 hour bus ride from Toronto to Temagami saw me arrive at the gas station to find my hosts Dan and Cindy waiting in the rain for my arrival. A quick introduction and the gear was thrown in the ute for the short trip to the lodge.

Lake Herridge Lodge is situated on the banks of the Lake Herridge with self-contained cabins a stone's throw from the water's edge. Talking to Dan and Cindy the first morning, Dan gave me a rundown of the land and the area their 300 square mile bear management unit covered. After a few hours' sleep I was ready for my first evening in the tree stand.

Sitting in the stand I was alert and wired to every sound in the bush hoping that the next sound would be a Black Bear coming into the bait, darkness eventually saw an end to my first day bear hunting.

The next morning I couldn't get up fast enough, I was up early and back in the stand before sun up. The next few hours were much the same, spent looking at the bait and wishing a world record black bear come to the bait. I would learn that hunting over bait isn't as easy as all the YouTube videos would suggest. These bears are wild and I realised very quickly that they are very acute to any changes, quickly becoming nocturnal. After a quick lunch back at the lodge it was back to the tree stand for the evening. As the day cooled and the sun started going down, I was in full day dream mode when a noise caught my attention. I turned my ears and listened in its direction, it was the unmistakable sound of a bear snifling around in the timber. As the bear sniffed around knowing that there was food but, there was also a threat. He stayed just out of sight and then without a sound was gone. Getting back that night I was over the moon relaying what happened back to Dan and soaking up all the advice he could give me about how to tackle the rest of the week's hunt and successfully harvest a bear.

The next few days were much of the same long days in the tree stand, early mornings, lots of mosquitoes and wrestling my own mind. The long hours spent in the stand were the most mentally challenging experience, hours spent looking into the same patch of forest and same red and white bait bucket was as challenging as stalking deer in the high country. I gained an amazing appreciation for the animal with every encounter. From hearing the bear chatter his teeth at me circling my area and challenging me to get out, to listening to packs of wolves howling in the distance, it was an amazing experience.

On the 4th afternoons hunt I was making my way back into the stand. About 60 meters from the bait I realised that there was something big and black at the bait. Heart in my mouth I took off my backpack and shoes and started a stalk on what I assumed to be a 300 - 350 pound black bear. Stalking in I neared the comfortable shooting range of 18 meters, with the bear distracted by the bait I nocked an arrow and clipped on my release aid. With a plan formulated in my mind I decided to take a few steps left for a better shooting angle. At 20 meters out the bear froze and stared straight at me. I was sprung. Not knowing if this was the time I shot a bear or got attacked by one I froze hoping the bear would return to feeding, after a very tense few seconds the bear turned and retreated back into the bush. After picking myself up off the ground I backed out of the stand deciding that it was best to not disturb the area any further.

A few excited beers with Dan that evening and a new plan was formulated. I was to construct a ground blind on the opposite side of the bait with the hope that the bear would not be able to pick up my scent as it entered the bait. I was off to bed excited for the next day.

Up early again, getting to the bait in the dark I set up a very questionable ground blind and waited for the light to flood in through the canopy. Silence, ears pricked waiting for this bear to come back. As I gained shooting light I settled in and started ranging the bait, 12 meters. The nerves were high for the remainder of the morning, silently hoping that I wouldn't have to deal with a wounded bear at 12 meters. I was in the ground blind until the day got too warm then decided to head back to the lodge for some lunch and a bit of a fish. With the knowledge that a bear was hitting the stand in the afternoon it wasn't long before I was drawn back into the stand waiting out the evening...

On what I thought might be another evening of sitting, waiting and counting how many mozzies I could kill I heard the sound of an approaching bear. A few seconds later from out of the timber came a Black Bear heading straight for the bait. Getting myself ready and hitting record on the camera I watched as he went straight for the bait and sat down, just behind a tree. I used this as a chance to calm myself down and focus on what was the next step. 5 minutes later and he was up and moving. I raised my bow, coming to full draw and held for the shot. As the bear turned broadside, I rested the 20 meter pin behind the shoulder and released. With a twang the arrow flew through the air and I watched it disappear into the chest cavity, the bear reacting only to the sound of the bow. I knew straight away the shot was good, seconds later I heard the bear go down with a crash!

Fighting the urge to get out of the tree and run to see the bear I decided to pick up the ATV and pack up all my gear to give the bear as long as possible to expire. As I reached the spot where the bear was standing I saw that the arrow made a clean pass through. Following the blood trail to the bear I was excited to see all the hard work had come together, an ethical shot had been made with the bear only making it 80 meters. Finally I had an animal on the ground!

After spending a few minutes with the bear I got back to the lodge just in time to have a few photos with Dan and Cindy before sunset. With smiles all-round the next day was spent skinning and butchering the bear. The skin was sent to the taxidermist and the meat was donated to the local hunt club and a few other key people. The bear weighed in at 200 pounds.

So far in my short hunting career I have seen some amazing sights, met some incredible people and experienced how incredible that outdoors can be. I want to thank everyone who helped me achieve my goal, especially Dan and Cindy, who made me feel like a member of the family and were just as excited as me that I got my bear!

This article and the facsimile pages of Bowhunting Down Under magazine are reprinted here with permission.
To see Enver Ozkara with his bear at Lake Herridge Lodge, visit
Enver's trophy page on www.bowhunting.com